He’s a robust man who likes to wear finely tailored Italian suits and put on cosmopolitan airs. Draped in his ministerial robes, he looks like an over-inflated balloon about to pop. As a public prosecutor in the Italian town of Perugia, he has made a spectacle of himself by turning high profile criminal cases into carnivalesque farces. He fancies himself a kind of Grand Inquisitor charged with the sacred duty of exposing secret cults and sordid sex rituals and Satan worshipers. He figures a criminal prosecution can proceed based on wild accusations and sensational theories, rather than solid evidence. He likes to throw his weight around by intimidating suspects, witnesses, and journalists. He is eager to sue or threaten to arrest anybody who dares to publicly disagree with him.

His name is Giuliano Mignini, and by now he is a national embarrassment for any Italian with at least half of a brain. Mignini is a walking billboard for prosecutorial misconduct who makes a foul hash out of just about every case he gets his mitts on. The stench of corruption follows him around like a cloud of rancid gas. At this point, the only Italian who has a worse reputation around the world is former dictator Benito Mussolini.

At the rate Mignini is going, it should be only a matter of time before he too is locked up — or at least barred from practicing law anywhere on planet Earth. The man has demonstrated that he isn’t fit to run a traffic court in Peoria, let alone investigate murders in Perugia. But who knows? Perhaps the Italian system is geared to Mignini’s brand of mud-slinging. Maybe he fits right into the Berlusconi-styled videocracy, based as it is on exploitation and sleaze. Maybe Mignini will be allowed to go on slopping at the public trough, along with all the other overfed hogs. Only time will tell.

Mignini’s most infamous shenanigans have been on full display in the Meredith Kercher murder investigation and the subsequent trials of Amanda Knox and Rafaelle Sollecito. Throughout this ongoing debacle, Mignini has worked diligently to ensure that clear-thinking, fair-minded people across the globe come to thoroughly despise him. If his goal was to create an enduring legacy of shame and humiliation, then few can deny that he has been wildly successful.

Mignini’s goal was not shame and humiliation, however. What’s astonishing is that the Kercher investigation was in fact Mignini’s attempt to rehabilitate his professional standing from the damage caused by some of his other legal follies. The Amanda Knox trial was Mignini’s way of trying to regain credibility. One shudders to think what he might do if he felt like engaging in deliberate self-sabotage.

Mignini’s problems began in 2002, when he attempted to link the death of a prominent physician, Dr. Francisco Narducci, with a far-reaching criminal conspiracy connected to the Monster of Florence murders. Dr. Narducci’s body was found floating in a lake near Perugia way back in 1985. A police investigation at the time produced no evidence of wrongdoing. The doctor’s family and colleagues believed his death had been a suicide. After listening to the rumors and innuendo being bandied about by various “sources,” Mignini had the bright idea of reopening the investigation. He then started feeding the press a series of elaborate tales involving secret societies, violent crimes, and vast cover-ups. 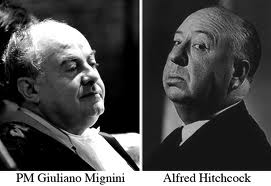 Early in 2002, Mignini had Narducci’s body exhumed and examined. He asserted that the body was not decomposed enough to be Narducci’s. A medical examination proved otherwise; the corpse was in fact the deceased doctor. Mignini then theorized that the body had been swapped — not just once, but twice. He alleged that Narducci had been involved in a secret occult group whose members had killed him in order to ensure his silence. According to Mignini, Narducci’s father Ugo, who was a member of a masonic lodge, had masterminded the cover up. Mignini’s web of intrigue spiraled outward to include various government officials and law enforcement officers. He went on to indict 20 people and charge them with various crimes. Tabloid reporters and conspiracy theorists ran wild with this story. The only problem was Mignini had little or no solid evidence to back it up.

People who dared to question Mignini’s methods were subjected to legal threats and intimidation. In April 2006, Mignini had Italian journalist Mario Spezi arrested for complicity in the homicides of the Monster of Florence case and for interfering with the murder investigation. Spezi was held for 23 days, 5 of them without a lawyer. His case stretched on for months. Douglas Preston, who co-authored with Spezi the acclaimed true crime book, The Monster of Florence, has described being hauled into an interrogation by Mignini in which he was accused of being a criminal and a Satanist and threatened with indictment unless he ceased his investigative reporting and left Italy altogether.

In 2006, Mignini was charged with abuse of office for allegedly ordering the illegal wiretapping of the phones of various police officers and journalists. In January 2010, a court in Florence found him guilty of exceeding the powers of his office and he was given a 16-month suspended sentence. Mignini appealed the conviction, stating, “My conscience is clear. I know I did nothing wrong.” He was able to remain in office through the appeal process, since Italian law does not consider convictions final until all appeals are exhausted. In November 2011, the Court of Appeal in Florence overturned Mignini’s conviction for lack of jurisdiction and referred the case to the prosecutor in Turin to decide whether to re-file the charges. Italian journalists have pointed out that even if Mignini were convicted, offenses such his are rarely grounds for removing a prosecutor from office.

It wasn’t until March of 2013 (the wheels of Italian justice grind away ever so slowly) that the Supreme Court of Italy refuted once and for all Mignini’s theories and indictments pertaining to Dr. Narducci’s death. The Court ruled that Mignini’s criminal conspiracy “did not exist”, and that Francesco Narducci died by suicide — which is what sensible people had thought all along.

So the Meredith Kercher murder investigation and the high profile trial of Amanda Knox — set in motion in autumn of 2007 — occurred in a context already tainted by a reckless, self-serving prosecutor. Mignini seized on Kercher’s murder as a way to regain his footing and reassert his authority. In Amanda Knox and her boyfriend, Raffaele Sollecito, he found a pair of scapegoats he could flog in the courts and in the press in order to bolster his own floundering reputation.

At this point, any reasonable person who reviews the Kercher case — no matter what they think of Amanda Knox as a person — cannot help but conclude that Mignini has made a colossal mess of the whole affair. It goes beyond mere incompetence, and verges on criminal malfeasance in its own right.

When Kercher’s slain body was found, Mignini was quick to seize on her roommate, Knox, as a vulnerable target for his “investigation.” He then proceeded to paint her as a sex-crazed American harlot, a she-devil who had manipulated her Italian boyfriend, Sollecito into aiding and abetting her homicidal urges. Mignini had no physical evidence with which to prove Knox’s guilt, and he had no motive for the crime of killing Kercher. When DNA evidence placed a petty thief and drug dealer named Rudy Guede squarely at the murder scene, instead of backing away from Knox, Mignini doubled down and tried to argue that Knox, Sollecito, and Guede had all participated in the crime, killing Kercher during a drug-fueled sex-game that culminated in a Halloween ritual sacrifice. When Mignini has no evidence, he simply lets his imagination run wild with tales of Satanic orgies. This would be merely ridiculous, except that it involves slandering and publicly defaming the character of people who should be presumed innocent until proven guilty. And the tabloid media loves to spread lies about people, especially when it comes to young women who can be demonized as evil seductresses or femmes fatales.

Mignini and his police lackeys obtained a “confession” from Knox which implicated her employer at the bar she worked at. They badgered and slapped and screamed at Knox until she agreed to sign the statement they placed in front of her. She had no lawyer present, because they discouraged her from seeking legal counsel. No video recording or transcripts exist for this interrogation. Anyone who has ever been arrested knows how this kind of interrogation goes.

In lieu of any solid physical evidence linking Knox and Sollecito to the murder, Mignini produced two bits of sketchy “DNA evidence” — from a knife and a bra clasp — that were most likely contaminated and have thus been cast into doubt by just about every legal expert under the sun. The police lied to Knox by telling her she had tested positive for HIV, so they could then obtain a list of everyone she’d had sex with — a grand total of less than ten men. For Mignini, young women in college who, heaven forbid, have sex are fair game for public shaming. Here he was all too happy to drag Knox’s name through the mud in order to pursue his own self-serving agenda.

No wonder Knox’s conviction was overturned during the appeal process. There was simply no compelling evidence put forth to justify a guilty verdict. If this same case had been argued in a courtroom in Los Angeles or New York, with high-powered defense attorneys such as Johnny Cochran or F. Lee Bailey on the other side, Mignini would have been so thoroughly demolished that his bald head would have been spinning faster than Linda Blair in The Exorcist. He would have been forced to apologize to the judge for wasting everybody’s time, then run out of town with a crowd of drunk and angry journalists nipping at his heels. Yet in Perugia he was able to lick his chops while an innocent woman and her boyfriend sat in prison for four years waiting for the legal process to grind along at a glacial pace.

Perhaps anti-American sentiment played a role in Mignini’s bizarre fixation on Knox as his prime suspect. No doubt plenty of us have anti-American sentiments. Yet this is no excuse for locking someone up for four years, based on nothing but sleazy accusations and tabloid theories. Mignini is lucky that America didn’t send in a team of Navy Seals to get Knox out of his filthy prison and blast his fat ass to kingdom come. As it stands, another trial of Knox is now underway, but she is back home safe in Seattle, and not likely to head back to Perugia any time soon for more fun and games with Mignini.

One thing we do know is that we now have a new word for “pig” in Italian: Mignini.