In their very first batch of DNA profiling, the authorities from a vaginal swab and a toilet paper sample obtained the profile of the intruder/rapist, and they knew as of November 6 (the date of the arrest of Sollecito, Knox and Lumumba) that this perpetrator was not Sollecito or Lumumba. This exculpatory information was not immediately disclosed to the defendants, and indeed, the authorities hid the exculpatory DNA results (as well as the still-missing test results from the downstairs apartment) from Judge Matteini, who on November 9 decided on the basis of the prosecution’s evidence to remand the defendants to jail pending trial, and from Judge Ricciardi who later affirmed the pretrial detention order.

On November 16, the police, on a tip, broke into Rudy Guede’s apartment and seized 5 items bearing Field Nos. A, B, C, D and E, most of which had apparent blood on them. Of these items, Field No. B (a green toothbrush) has been designated as Rep. 58, which corresponds with an analysis date immediately following the completion of Batch 2 on November 14. Thus, utilizing Field No. B as a reference sample, the authorities by November 15-16 not only had matched and identified the profile of the rapist/intruder, but they also had determined that his name was Rudy Guede. Notably, however, the analysis of this item was conducted outside of the formal notification and testing procedures prescribed by Italian law, and thus the incarcerated suspects — Knox, Sollecito and Lumumba — were unaware of the access to Guede’s apartment or the matching of his reference sample to the vaginal swab and toilet paper samples that had been analyzed on November 5-6.

Having entered Rudy Guede’s apartment on November 16, seized several bloody items, and then identified Rudy Guede as the perpetrator, one would think that in the very next batch of testing (Batch 3: November 23-29) the authorities would analyze these bloody items. However, they did not: instead they focused their Batch 3 analysis exclusively on items that they thought would inculpate Knox and Sollecito, i.e., samples from Sollecito’s residence and auto (none of which, however, were incriminating). The item in Batch 3 that attracted the most intense scrutiny was Kercher’s bloodied bra (Rep. 59). It is clear that the lab had determined from the outset that it would attempt to isolate male “touch” DNA on the bra (presumably, Sollecito’s DNA). On November 23, seven samples (a relatively large number for a single item) were extracted from the bloody garment. Each of these samples was analyzed utilizing a non-blood (i.e., “saliva”) protocol, even though (i) the photos of the bra depict copious blood, (ii) the lab report (in contravention of the SAL records) claims that the samples were TMB-positive, and (iii) Stefanoni in her court testimony and powerpoint presentation described the saliva-protocol-tested samples as “blood”. The initial round of bra sample profiling appears not to have been useful for the prosecution. Of the seven samples, five revealed Kercher’s profile only. In addition, Stefanoni’s powerpoint presentation indicates that Y-DNA testing was performed on these samples but yielded no results (curiously, these YDNA tests are not otherwise disclosed in the lab records). The results of the remaining two of the initial seven samples, i.e., 59b1 and 59a2 have been suppressed.

Notwithstanding the suppression of profile 59b1, Stefanoni must have seen something of interest in the results for that sample. On December 5, in a lab session that occurred after the completion of Batch 3 testing and appears not to have been disclosed to the defendants, Stefanoni secretly prepared a second and third extraction of 59b (i.e., 59b2 and 59b3). 59b2 yielded the mixed profile of Rudy Guede and Kercher, and a corresponding Y-DNA analysis also yielded the profile of Rudy Guede. Any profiles corresponding to 59b3, like 59b1, have been suppressed.

In Batch 4, 13-18 December 2007, the lab finally analyzed the items that had been seized from Guede’s residence on or about November 16 and in a subsequent raid. The items included numerous bloody items, which ultimately proved to have Guede’s DNA on them: a towel, a sink strainer, a museum ticket, sink trap, and a luminol-positive stain on the floor. Considered together, these exhibits suggest that Guede was wounded and bleeding prior to fleeing to Germany, a fact that would be consistent with (i) photographs showing healing wounds on Guede’s hands at apprehension, and (ii) Guede’s own admissions that he had cut his hands in the course of the Kercher murder. Notably, all extraction and quantification records for the Batch 4 testing of Guede’s items have been suppressed, and it appears that at least five profiles resulting from analysis of these items have been suppressed. The suppressed profiles correspond with: a pair of jeans (“Loose Fit”) brand, possibly a leather jacket and/or sink and structure-related items at Guede’s apartment.

In Batch 5 (29 December 2007-early January 2008, not attended by defense observers), the lab isolated two blood-positive samples bearing Guede’s profile. These new samples were from Kercher’s purse and sweatshirt, indicating that Guede had handled, and perhaps bled on these items at the time of the murder.

Curiously, the sample serial number (49037) for Rep. 58 (i.e., the toothbrush that was seized from Guede’s apartment on or about November 15 and used as the Guede reference sample) indicates that this sample was extracted after the completion of Batch 5, i.e., in mid-January 2008. As set forth above, however, given the Rep. number (58) and the police entry and seizure of items at Guede’s apartment on or about November 16, 2007, there must be an earlier extraction of this item, the records and profile of which have been suppressed. In other words, the Guede reference profile that has been produced by the prosecution to the courts and defendants is a substitute for a different profile that was actually generated in November 2007. Moreover, not only was this substitute profile not extracted until January 2008, but as discussed below, the ensuing amplification and profiling process was not conducted until May or June 2008. Note that the unorthodox extraction of this item appears to have been conducted outside of the formal sampling process and therefore unknown to the defendants, and also appears to coincide chronologically with the secret, one-off rerun of sample 165b, i.e. the bra clasp purportedly bearing Sollecito’s profile. Continue reading —-> Lab Data Suppression: Methodology, Sources and Summary 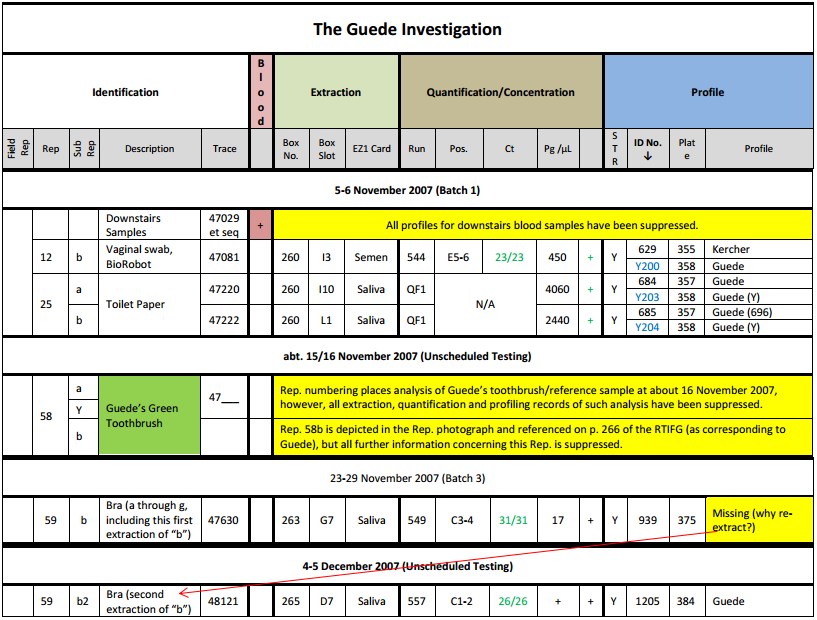 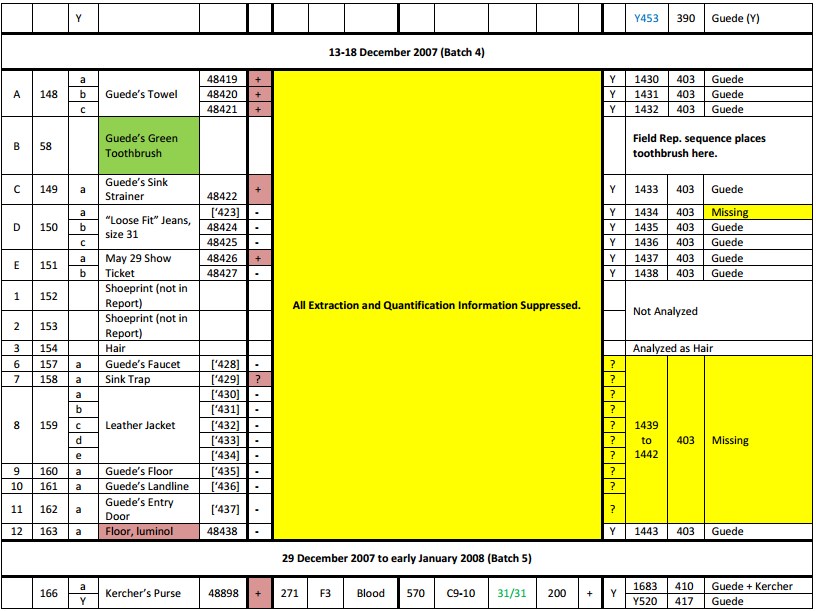 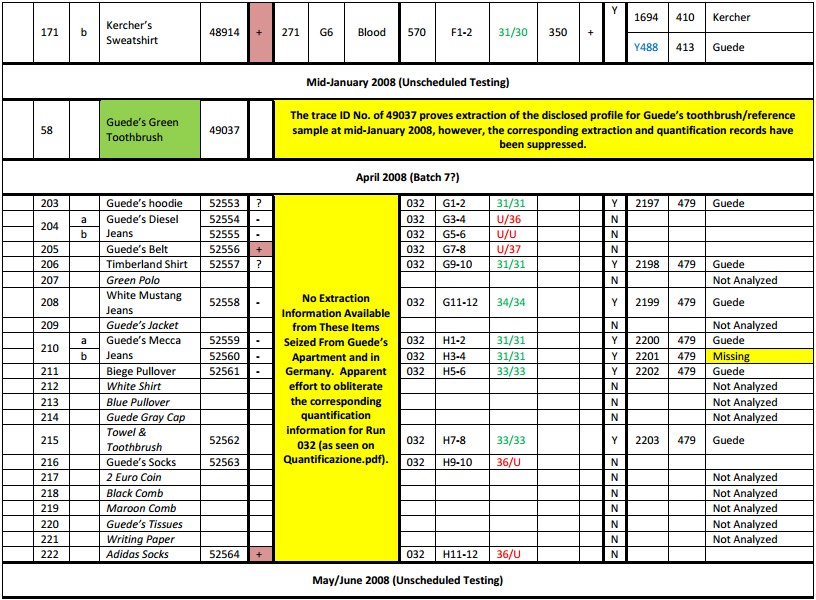